It’s been an outstanding year for Glasgow and Scotland at the ICCA Congress which took place in Dubai this week.

ICCA is the global community and knowledge hub for the international association meetings industry and comprises over 1,100 member companies and organisations in almost 100 countries.

Aileen Crawford elected to ICCA Board

Many congratulations to our Head of Conventions, Aileen Crawford, who has been elected onto the Board of ICCA for the Destination Marketing Sector role.

Aileen has been working in the international meetings industry for over 20 years and is currently the lead for the Business Tourism Workstream within Glasgow’s Tourism & Visitor Plan to 2023 and the Depute Chair of ICCA UK & Ireland.

The Incredible Impact of the World Down Syndrome Congress

The World Down Syndrome Congress which was held in Glasgow in July 2018 was recognised as a leading example of excellence within the global meetings industry thanks to the success of its Commissioner Programme which was first developed when Down Syndrome Scotland and Glasgow began bidding to host the congress.

The programme placed three local young people with Down syndrome - Sam, Andrew and Stuart - at the very heart of Glasgow’s campaign to bring the congress to Scotland and subsequently put them at the forefront of the conference itself.

The associations, DSS and DSi, were presented with an Incredible Impact Award and received a $7,500 grant towards future work of this kind in subsequent World Down Syndrome Congresses.

The goal of the Commissioner Programme was to encourage Sam, Stuart and Andrew to tell their story and inspire other young people with Down syndrome from Scotland and the rest of the world to get involved in the Congress, helping to realise DSI’s vision of “People with Down syndrome living healthy and meaningful lives in the community”.

In March 2018, to coincide with Down Syndrome Awareness Week, DSS in partnership with Glasgow Convention Bureau, VisitScotland and Glasgow Welcomes hosted People Make Glasgow Welcome workshops. These were delivered by members of the Commissioner Programme and tailored for front of house staff across the hospitality industry in Glasgow including hotels, restaurants, venues, taxi drivers and visitor attractions.  The workshops aimed to educate customer facing staff about Down syndrome, remove some of the stigma surrounding the condition and ensure that all delegates received a warm and appropriate welcome when the Congress took place.

It has been a pleasure to welcome the World Down Syndrome Congress to Glasgow and to see the fantastic part Sam, Andrew and Stuart played throughout, demonstrating that People really do Make Glasgow. This is a perfect example of how conferences have a much greater impact than economic benefit. The Congress really helped to raise public awareness for the community and have left a lasting legacy on the city benefitting both Glaswegians and tourists living with Down syndrome. Many congratulations to Down’s Syndrome Scotland and DSi, we look forward to seeing the continued success of the Commissioner Programme as they take the Congress to new host cities around the world.

Glasgow is working towards becoming one of Europe’s most sustainable cities by 2020 with a focus on improving quality of life in the city, protecting the environment and developing a green economy with sustainability top of the agenda.

In August 2016, Glasgow became the first city in the UK to be included in a new sustainability ranking of leading international conference destinations, the Global Destination Sustainability Index.

We were delighted to receive the news at the ICCA closing ceremony that Glasgow has once again been included in the top 10 global destinations on the GDS rankings.

Check out our Sustainability Toolkit which acts as a guide to hosting a green meeting in Glasgow.

To kick of Glasgow's Energy week, we've relaunched our Sustainability Toolkit which aims to simplify the process of organising a green meeting in Glasgow https://t.co/cnm7ygo469 #IdeasBecomeLegend #EventProfs #SustainableGlasgow pic.twitter.com/fxtLLEUCjF

And finally, many congratulations to our partners in VisitScotland’s Business Events team who picked up the Best Marketing Award for #IdeasBecomeLegend.

We’re delighted to be a part of this campaign which showcases those at the forefront of world changing innovation in Scotland to the Business Events Sector and aims to further grow our relationships with academics and industry ambassadors.

Glasgow is truly a city of innovation - check out the ideas and people of Glasgow who have changed the world! #IdeasBecomeLegend pic.twitter.com/FDbZjBw2pD 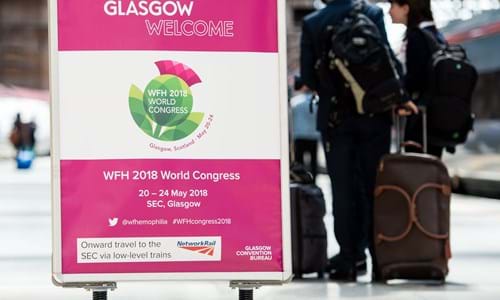 Glasgow celebrates busiest May on record for Business Tourism