Cycling Scotland is the nation’s cycling organisation. Working with others, they help create and deliver opportunities and an environment so anyone anywhere in Scotland can cycle easily and safely.

On the 30th and 31st October 2017, 200 delegates met at the Technology and Innovation Centre at the University of Strathclyde for the Cycling Scotland Conference.

As part of the conference in Glasgow, Cycling Scotland offered delegates the opportunity to take part in one of four study cycle tours around the city, in addition to a walking tour in nearby Paisley.

This sustainable delegate activity also raised awareness of cycling projects in Glasgow including those from Next Bike, Scottish Canals, Soul Riders and Bike for Good, in addition to a visit to the Sighthill regeneration project in the North of the city.

The aim was to embed active travel as part of the conference and beyond, and to highlight some of the ways that Glasgow is helping its residents and visitors to travel actively.

One such study tour led delegates along the canal network in Glasgow, covering a total of five miles. The tour offered delegates the opportunity to cycle along part of the picturesque canal route, taking in some of the cycling infrastructure in place. Delegates heard a short talk on the cycling projects and initiatives along the canal by Scottish Canals, including their ‘Unlocking the Story’ app, which enables visitors to interactively explore the canals heritage.

Glasgow’s bike share scheme, provided by Next Bike UK, was also showcased on another study tour which saw delegates cycle, using Next Bikes, along some of the segregated cycling infrastructure on the South of the city, visiting community cycling group Soul Riders and Bike for Good’s recently completed Southside hub to learn about future infrastructure plans to make traveling by bike in Glasgow easier and safer.

Including study tours in our annual conference was a great way for delegates to experience cycling in Glasgow and to learn about some of the innovative projects that are taking place across the city to make active and sustainable travel a real possibility for those living, working and visiting the city.

We hope that by including these study tours in our conference programme, delegates will take their learning and apply it locally, nationally and internationally. 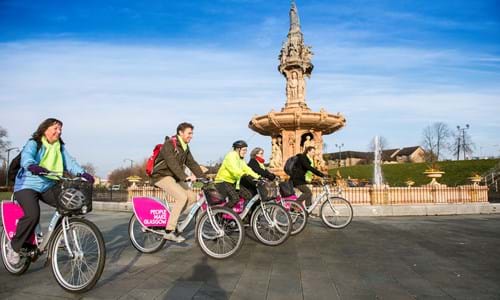